I originally published this blog post in 2014. Back then, the title was “Why 2nd Grade LOVES Base Ten Blocks”.

I still think that base ten blocks are an amazing tool for 2nd-grade students.

But my thinking has changed.

If I were to rewrite that title now it would sound something like “Why 2nd Grade LOVES Base Ten Blocks… But They Love Other Tools Too… There’s a Time and A Place for Everything!”

It’s not quite as catchy. 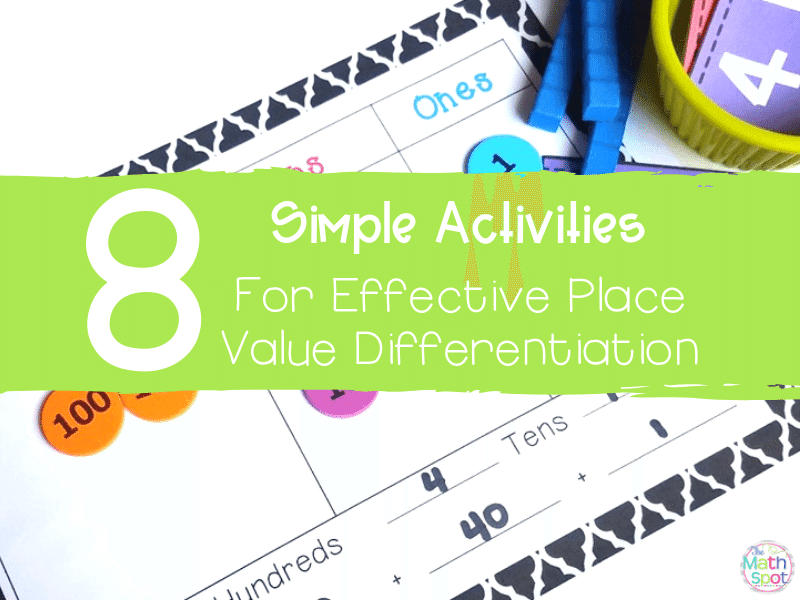 In the past 5 years, I have learned a lot more about how not all hands-on materials are created equally! Think of manipulatives on a continuum.

At the most simplified level, we have manipulatives that are to scale and are groupable. This means that they can be composed and decomposed into groups. Linking cubes would be an example because your students can put together ten cubes (ones) to create a stick (ten). It’s groupable and the result is to scale.

Moving down the continuum we have manipulatives that are to scale but have been pre-grouped. This is where my beloved base ten blocks lie. They are still to scale -the ten is the same size as ten ones put together. The difference here is that your students can’t compose and decompose a ten or a hundred- it has already been done for them!

Take this one step further. A pre-grouped, non-proportional model makes things even more complex. Place value discs are an example of this level of tool. The one is the same size as a hundred yet they represent very different amounts. This tool requires students to have a solid understanding of place value, however, it allows students to explore and manipulate MUCH larger numbers! Imagine working with a groupable, to scale model of 231,428… not a pretty picture!

All of that to say that I still absolutely LOVE every single one of the activities listed below. But while the pictures and examples all use base ten blocks I would challenge you to think about the model that would best serve each of your students when carrying out these activities!

**A side note. I say that I “challenge” you but think about how this opens up the possibilities for you as a teacher! You are now able to quickly and simply differentiate each of these activities by simply asking your students to use a variety of materials! Plus, if you use an activity in October with linking cubes, you can put out the SAME CENTER in December using base ten blocks. Bring the SAME CENTER out again in April using place value discs. No extra work on your part and you have just created 3 different math centers!

What follows is a list of 8 activities that help students to master the skills in the 2nd grade NBT standards using nothing other than base ten blocks (2019 edit: OR any other appropriate hands-on material!).

Which number is greater, 23 or 32? If a student does not have a firm understanding of place value, the two numbers might as well be equal! Comparing numbers with base ten blocks allows students to see the magnitude of each digit and the difference in value across the ones and tens places. 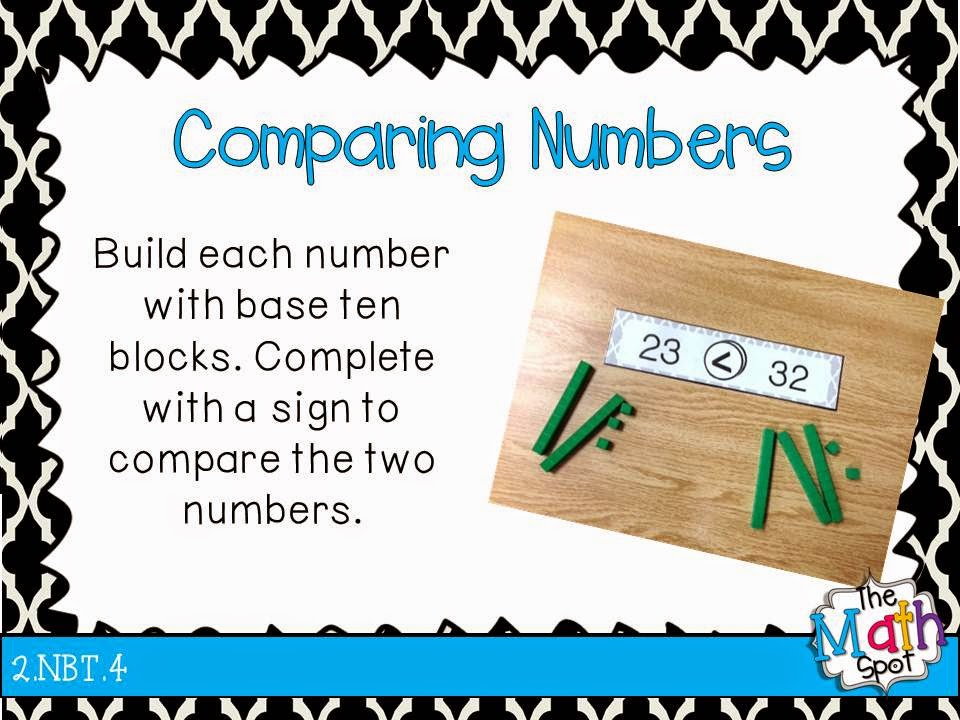 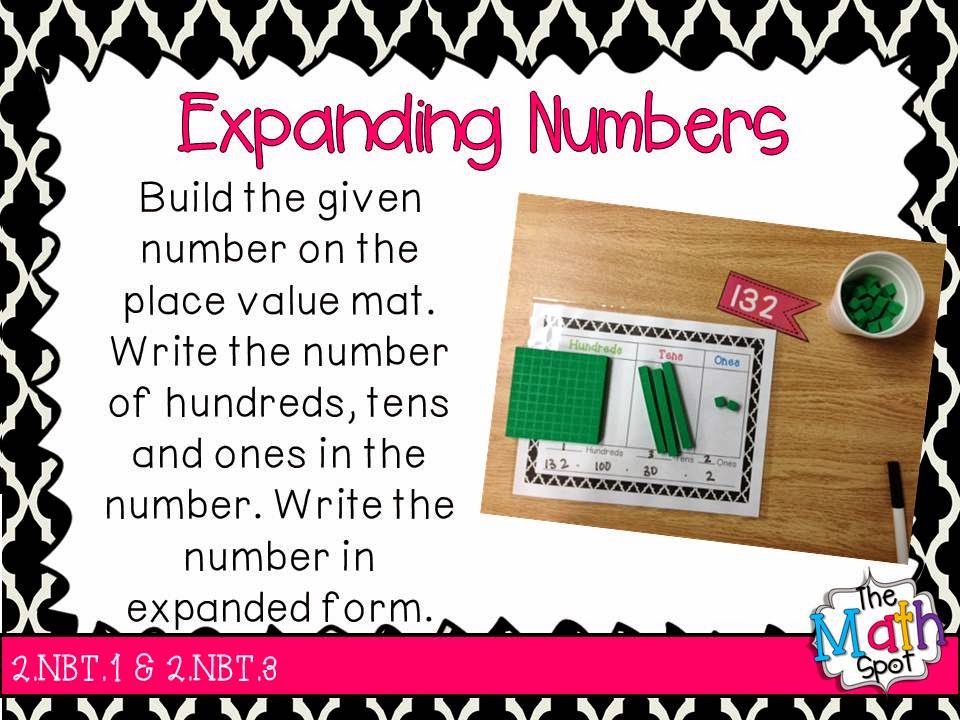 Activity #3: How Many Tens?

Given 35 ones, how many tens can you make? How many ones would still be left over? This foundational skill lays a strong framework for the traditional addition algorithm. Students will know that 6 + 7 = 13 is represented by 1 group of ten with 3 left over or ungrouped. No more ‘I carry “the” one and “put down” the 3’. Students will understand exactly what is going on so that there are no careless errors due to lack of procedural understanding! 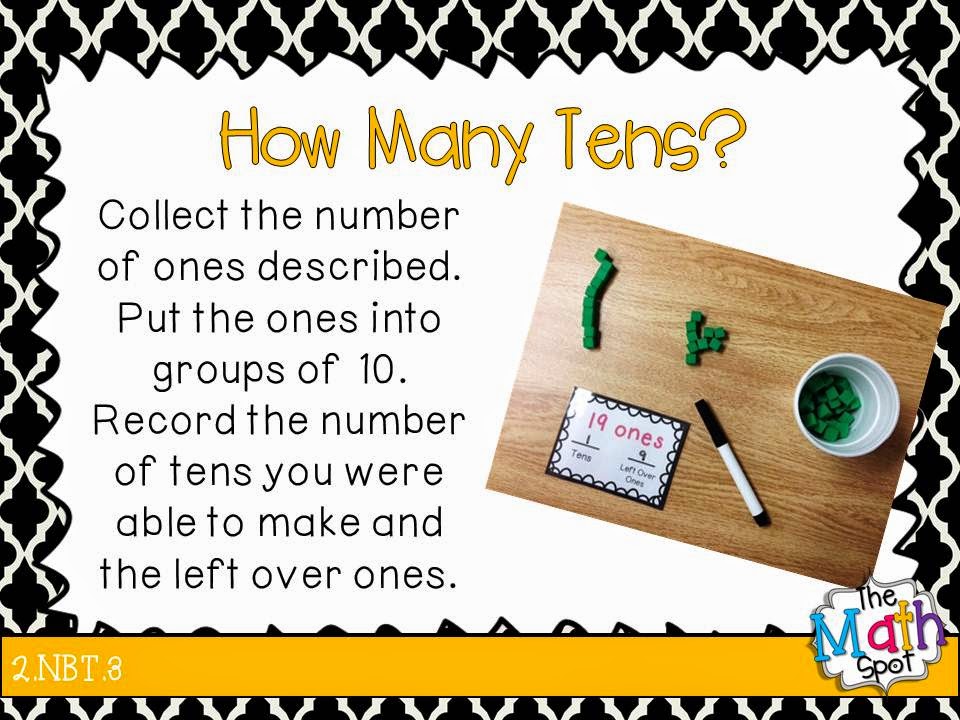 Activity #4: How Many Hundreds?

Given 46 tens, how many hundreds do you have? How many tens are left over or left ungrouped? This is a skill that 2nd graders are expected to master according to the CCLS. Students can practice and begin to see patterns and rules that always apply when grouping tens into hundreds. 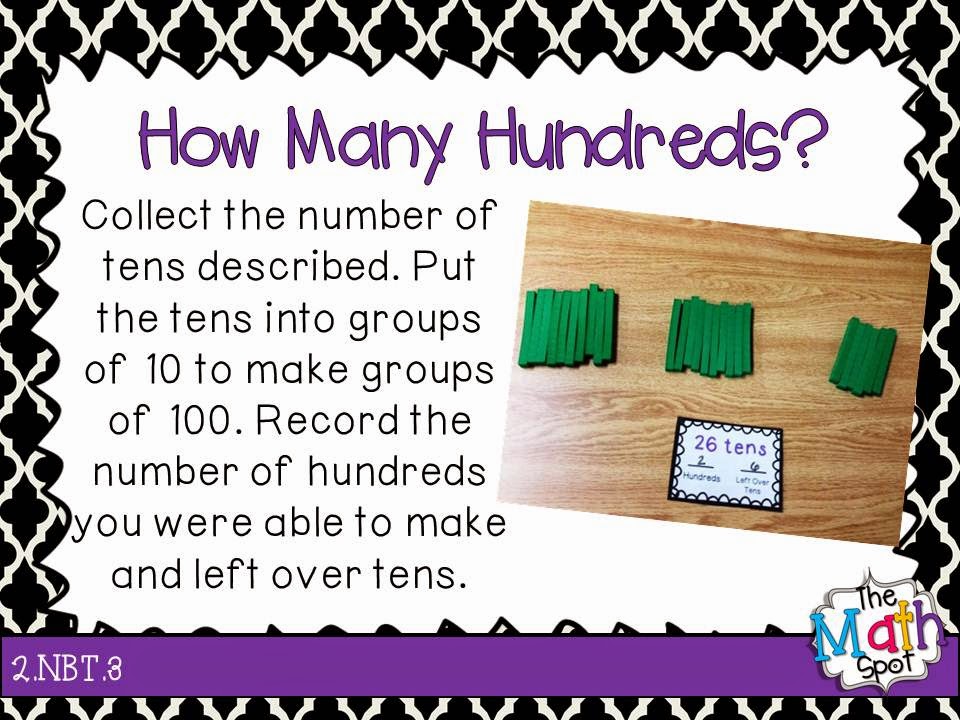 If you asked your students to solve “Ten more than 45” would they instantly know that 55 is the answer or would they have to stop to work the answer out with pencil and paper? Ten More/Ten Less is an activity designed to allow students to start to see the patterns occurring in the tens place when another ten is added or when a ten is taken away. As students become proficient in this activity, they would be expected to move from re-counting the tens and ones each time they add or subtract and rather developing rules around the changes in the digit in the tens place. 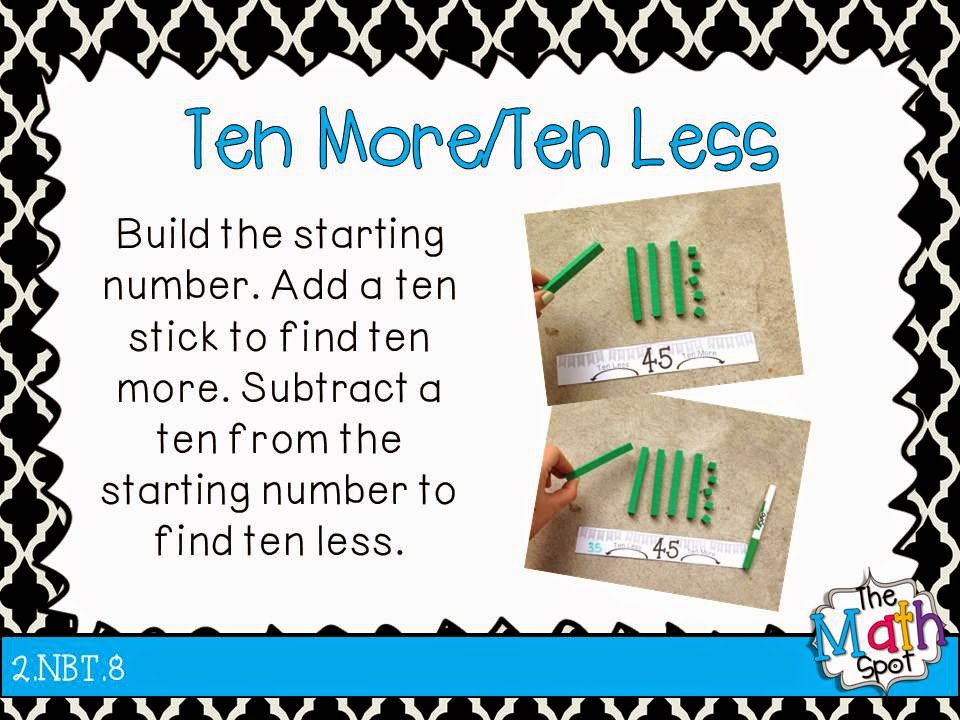 If your students have completed activity #5, you would hope that they could make generalizations which would allow 100 More/ 100 Less to be easily understood. You’d hope. This activity allows students to make those connections in an explicit way. 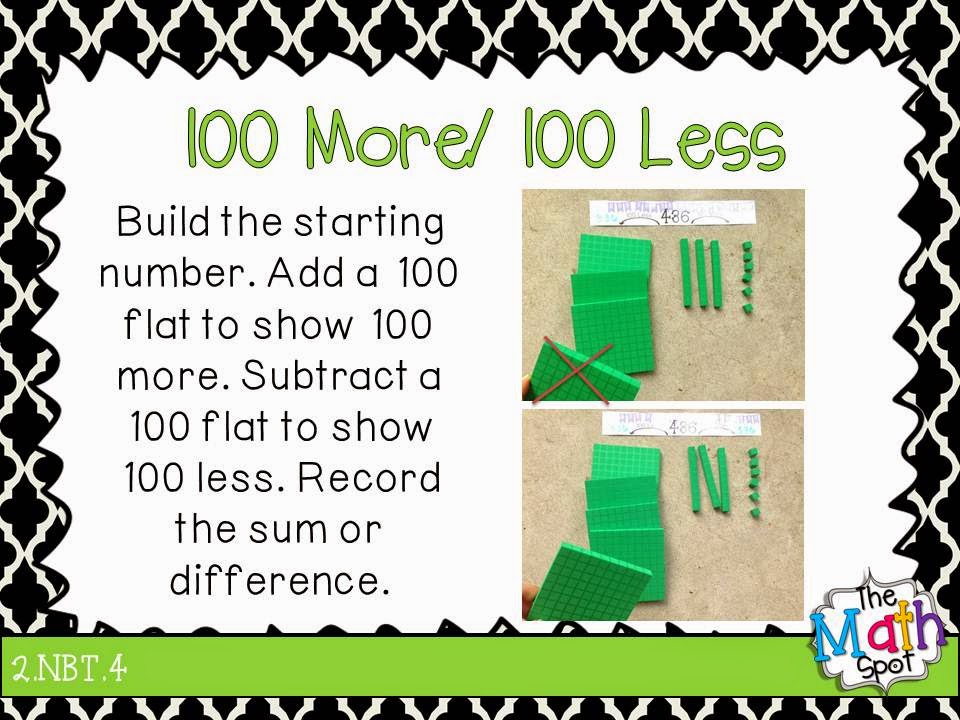 I love teaching addition with base ten blocks let me explain why:

I don’t know about you but putting up and putting down aren’t phrases in the glossary of my math book. 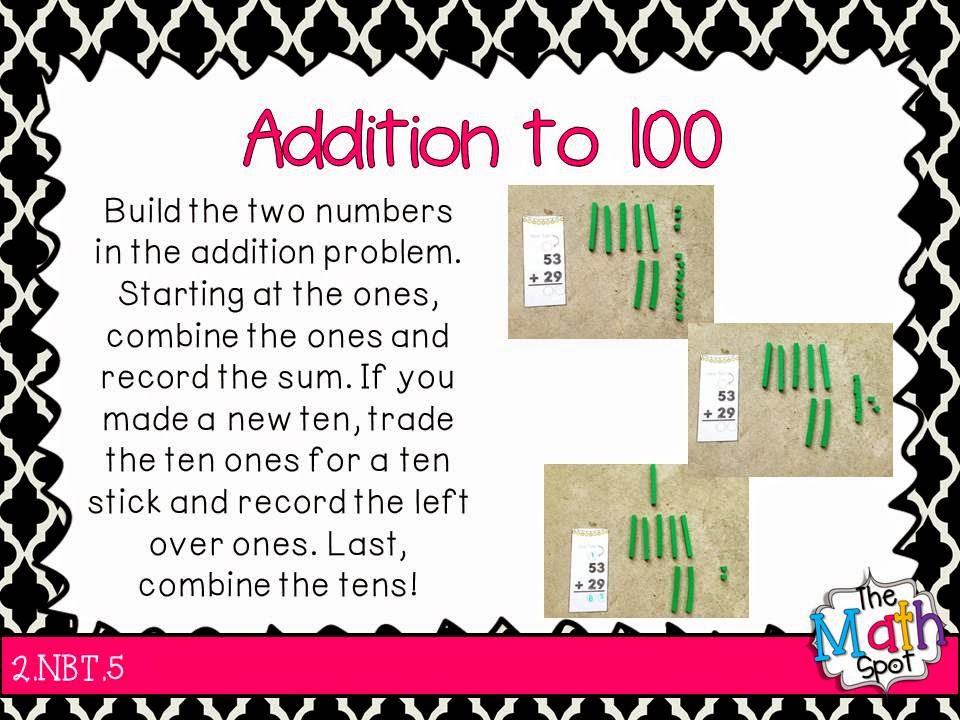 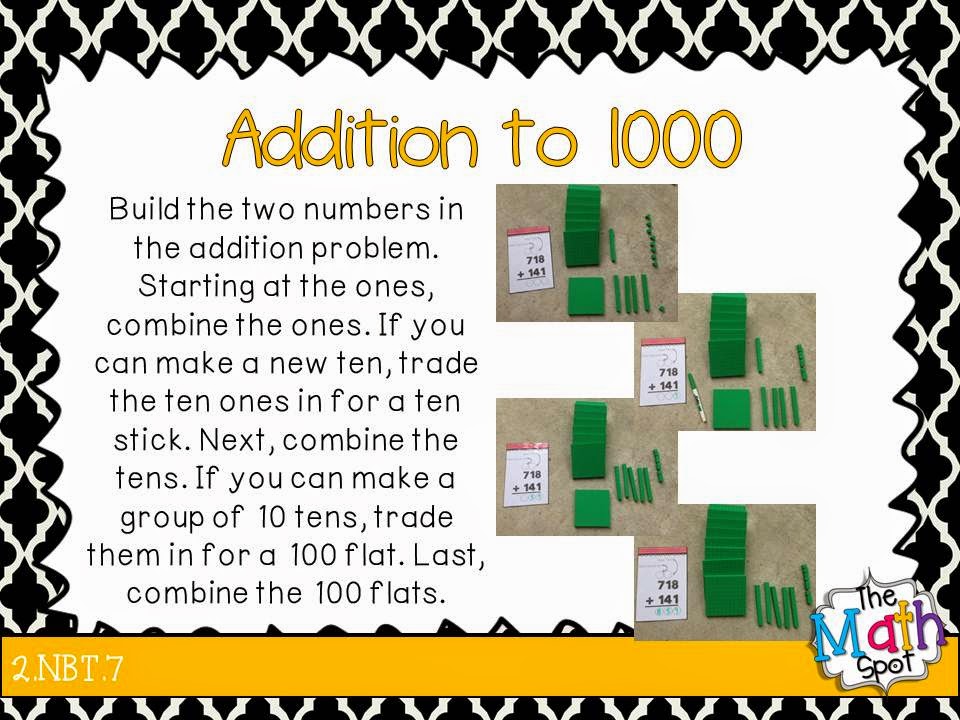 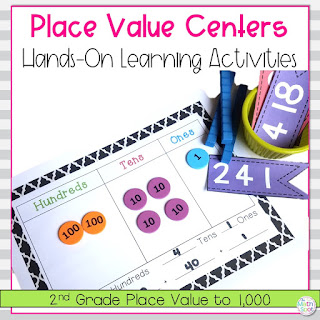 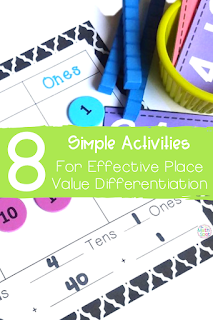