A few months ago, I wrote a post on using place value strategies to add two 2-digit numbers.  If you remember, students were decomposing numbers into tens and ones and combining like units. By using base ten blocks, students were able to easily make the connection between the digits in a number and their values.

<<Here>> if you would like to take a look in more detail.

Our second graders have been working towards this goal over the past few months. They have done extensive work in the world of place value and also in mental addition strategies. I am condensing here <in a big way> but one aspect of place value work they have studied is grouping and renaming units. 25 is 25 ones but is also 2 tens 5 ones. 345 is 345 ones, 34 tens and 5 ones or 3 hundreds, 4 tens and 5 ones. Etc.

Additionally, they are thinking of addition and subtraction in terms of place value. For example, if you have 46 and want to add 10 more, a student well grounded in place value knows that 46 is also 4 tens and 6 ones. “+10” is really just adding another ten. The result is 5 tens and 6 ones or 56.

Strategies Start Here
*If you are REALLY in a hurry, scroll down to the bold conversation below*

I walked into a 2nd grade class last week ready to show them a new way to organize 2-digit numbers vertically **read: leading to the standard algorithm*. Students would be using place value disks to show addition. If you aren’t familiar with place value disks, they are foam disks about the size of a quarter that say “1” “10” “100” etc. They are a non-proportional model that students who already understand the magnitude of 1s, 10s, and 100s can use to organize their learning when working with place value.

So we did. We traded in ones for tens. We found the total number of tens and ones and were pleased to find the answer.

This was the first day of this new instruction on NON-mental addition strategies. We weren’t doing any writing or algorithm to accompany the number disks. And something funny happened.

… thank you place value and mental strategies… No worries, they built them all “because when numbers get larger you will be glad you learned to organize your work!”

So the next day, students were tasked with writing numbers that match their number disks. *Read: The traditional algorithm”. Their work in place value again supported this work. Here’s what a problem might sound like:

By thinking explicitly about teen numbers as tens and ones, students give meaning to the traditional “carry the 1”. Fewer students are making errors like carrying the 1 where no new 10 exists, not carrying a ten when there ARE more than 10 ones and other errors that demonstrate a lack of understanding.

In need of HANDS ON math centers for your second graders that will help to keep their place value skills sharp? Check out these base ten block centers. They worked wonders for my kiddos and I know they will do the same for yours! 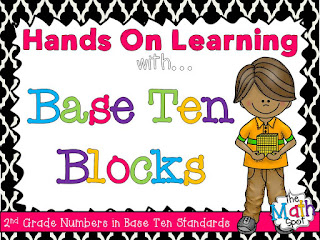 Build a Math Intervention Schedule that Plans for Practice!