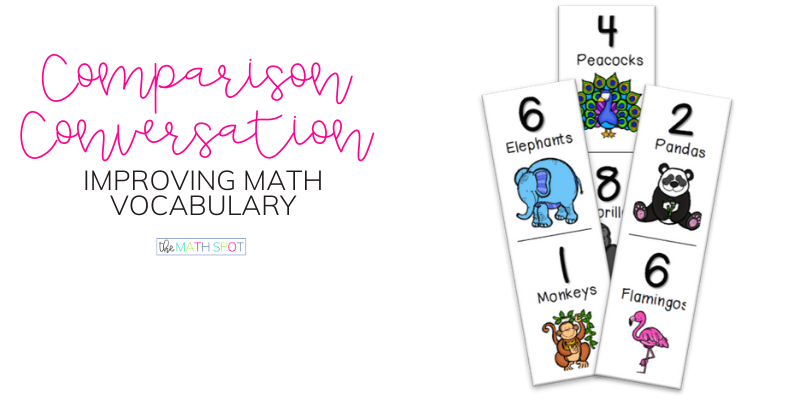 Comparison is a notoriously difficult math topic to teach. The most important things to remember when introducing comparisons are to keep it concrete and emphasize comparison conversation.

Students NEED to talk about math. A lot. It is one thing to be able to indicate which number or set of objects is more or fewer and another to be able to articulate it. And so, as my students explore numbers and counting we talk, and talk, and talk some more to solidify the associated language!

Keep It Concrete: Given a comparison card with two numbers, students count out blocks or counters to represent each number on the card. Students will then be able to reference their blocks to clearly see which number is more and which is less.

Comparison Conversation: Context can help to get a conversation started! On these animal cards, the number corresponds to a type of animal. In this way, the students have more opportunities to talk about the comparison in a variety of ways. These cards are free in my TPT store if you would like to grab them 🙂 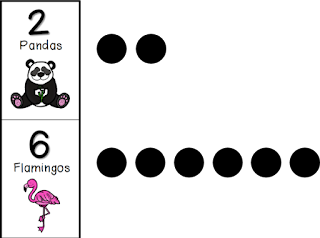 “There are fewer pandas than flamingos.”
“Two is less than six.”
“There are more flamingos than pandas.”
“Six is more than two.”

Keep It Concrete: Start by giving your students a target number. For example, 7. Ask your students to take a small scoop of counters and count to find how many. Your students will then determine whether they have more, less or the same amount as the target set.

Once your students are strong with the concrete material, you can also modify the activity by giving students cards with dots or pictures on them that they can sort into more, less or same piles based on a target number.

Comparison Conversation: Every time a student sorts and places a card have them say aloud a full sentence explaining why they are sorting in the way that they are. “My scoop is more because 9 is more than 7.” “My scoop is the same because they both have 7” or “My scoop is less because 2 is fewer than 7”.