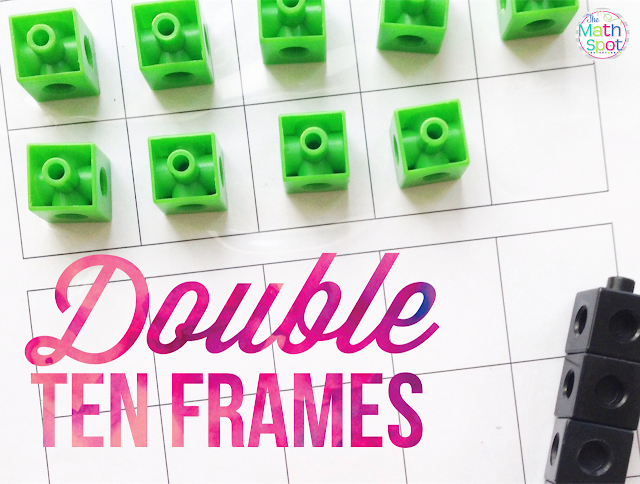 I have had my kids building teen numbers for over a month now. It’s a staple in their math centers. I have them focus on different attributes of teen numbers each time they do the activity but it is really about understanding the power of the “ten” in teen numbers. 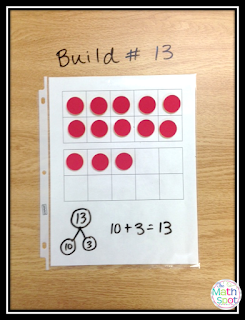 Early on, I give my students a number and just ask them to put out that many counters on their double ten frame being sure to fill up the first ten frame before moving on to the next.

After they build a number I ask about what they see and they tell me about the ten part and the “other” part. In building a significant amount of numbers my students begin to make discoveries about how the ten stays the same and how the teen number “tells” us how many ones there will be after the ten. I have found that laying this foundation leads to a very strong understanding of larger 2 digit numbers in future months.

I keep them on their toes and my students rise to the occasion with careful language and begin to make generalizations about teen numbers.

#2: Adding 3 Numbers Together
My students could tell you what addition means in their sleep. They clap their hands and cry out “Addition puts number parts together!”. But throw a third number into the equation and they will look at you like you have a third head! After getting over the initial shock of an addition sentence with three addends, students can use a ten frame to practice a strategy such as looking for numbers that make a ten and then adding the third part on.
No, not all addition equations with 3 addends have a pair of numbers that makes ten, but some do. And that is where you are going to start!

You can see how using a double ten frame allows students to experiment and figure out which number partners make a ten and then add in the final addend. If your students know their partners of ten this activity will be a breeze. If they are not yet fluent, this concrete activity will help them to understand how three addends come together as well as reinforcing partners of ten. 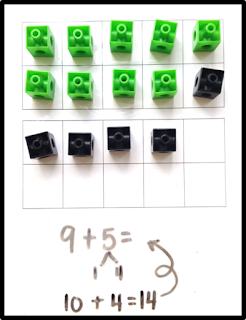 Double ten frames can also be useful for illuminating the “make a ten” strategy for adding two numbers together. You can see in this example adding a 9 and a 5 together how the double ten frame helps to illuminate the related 10 + fact.

A strong foundation in building teen numbers on the double ten frame as outlined in activity #1 will lead to success in this type of strategy.